For those who haven’t heard this news, here I am passing this information. I get the chance to have a student exchange program to the City University of Hong Kong, and I am incredibly thrilled. More information about how I get this chance will be explained in another post somewhere in the near future.

Actually, this news isn’t really a big news for me because I knew it from months ago, but now I feel that it is getting closer and closer since I am preparing myself for this. Now it feels more like a countdown, tick tock tick tock.

A week ago, I’ve just made my very first real progress, which was….making a passport. Tho I was living abroad for quite sometime, the passport that I used was the black one, but now, because I’m going abroad for different purpose than last time, thus I had to make a green passport. So, I went to the Kantor Imigrasi Jogjakarta that is located right next to the Jogja’s international airport. Yes, by myself girls, by myself 😀

I heard a lot about making passports, many people said “the office opens at 8 but usually you have to start to queue from 6.30 am to get the queue number, because it is limited“. Luckily, I googled first before coming, and turns out that now we can register ONLINE, which was soo efficient!

So, the first step to register is to open this link , and then there was this Layanan Paspor Online page by the Directorate General of Administration, and click on the Pra Pemohonan Personal. 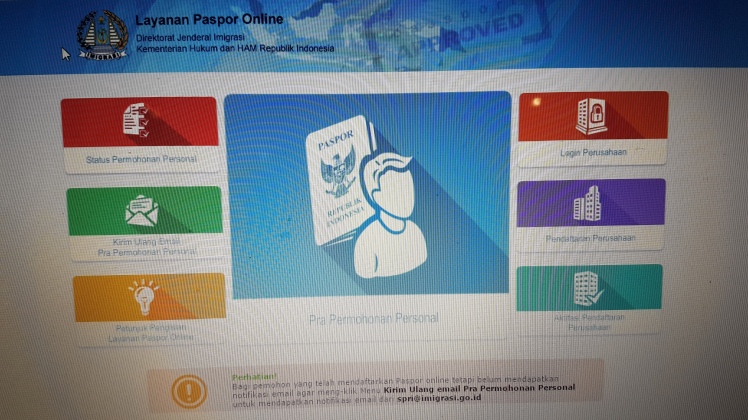 There I had to fill in my type of requests (which type of passport, reasons of change, etc), and also fill in my personal data. Then after that I needed to pay, and there were several options of methods of paying, but I chose to pay through BNI teller. After paying, I got my receipt and then I could pick the date of my arrival to the office, so I chose the day when I have no class at all.

Then, on Tuesday at 8.30 I came to the office at the exact date and time written on my email from the officals with my original and copy of Kartu Keluarga, Akta Kelahiran, Identity Card, and my old passport. Also, because my ID Card was issued by the West Java officials and I wanted to make my passport in Yogyakarta, thus I had to give a copy of my UGM Student Card as well. When I arrived there, I went to the front office directly to get my number and took one page of personal data form. I swear it was fuuuull of people so I was worried that I have to wait for a long time. But then… I got number 009, because it turns out that the queue for online and offline registration were different, so when my number was still really low, the offline one actually has reached its 100ish. The difference was insane! Thank God I applied online.

For the online applicants, everything just went incredibly fast. I was just seated after filling in my form, and five minutes after that, my number got called. I went to a room ful of registration table and I gave all the copies of my documents, and the officer checked the original documents as well. Then he asked me to went outside the room to wait for my name to be called by another official, for taking the pictures and recorded my fingerprints, and so I went out to wait for 30 minutes, then my name get called AGAIN. It was so damn fast! After all of that, the second official gave me a paper with my name and the date I could take my passport. For me, it was three days after, so on Friday.

On Friday, I came there again, with the same paper the official gave me. I gave it to the counter of Pengambilan Passport, and then I had to wait for less than 30 minutes, and then I got my new passport finally!

On the left picture, there is the old and new Indonesian green passport; on the left is the old one, and on the right is the new one that I have currently. On the second picture is the comparison of the current green passport with the black diplomatic passport. The design from outside actually kinda look similar with each other. The only different is on the color and also in the inside of the passport, like the notes from the Indonesian government. But either way, I like it sooo muchos.

Call me weird but I feel so thrilled having this passport, and I don’t know why. Maybe because I did it all by my own hard work so it feels so satisfying. Or maybe because the reason why I am happy is not because of the passport, but beyond that; the value of this passport, which is more adventures awaits!

p.s credits for my featured picture goes to this site.

Amalia, or you can call me Mal
An extroverted introvert who's in love with her cutie inner child x

30 Days Thought Catalog College Student(s) in a Nutshell Countdown to HK Europe and its Sparks Hong Kong, the City of Life Life and Love Review: Movies SCG Thailand International Internship 2017 Some thoughts Who Am I? Wonderful Indonesia