Many people asked me how much money I spent when I went to Lombok and Gili a month ago and everytime I said that it was cheap, they always be like ‘4 million?’ ‘five?’ ‘ten?’. But no, we went lower than that. We were there for five days four nights, and only spend less than IDR 3 million, included everything – i meant EVERY THING. What?? How??!

First hack, buy return flight tickets at once. In my case, I was the last one to buy the tickets (less than one day before departure) while my friends have bought their tickets from several days ago through Traveloka. They got the return flight tickets for IDR 1.300k, but for me when I checked, it was freaking IDR 900k for one way! I almost got heart attack to think that I will spend 2 millions only for tickets. But I was sotoy-ly tried to check whether buying return tickets would change the price, and it did! So weird that the same plane, same flight, same ticket – but different method of buying resulted to a very different price. At the end I got the same price with them which was IDR 1.300k in total. It also should be noted that I bought mine at the very last minute. 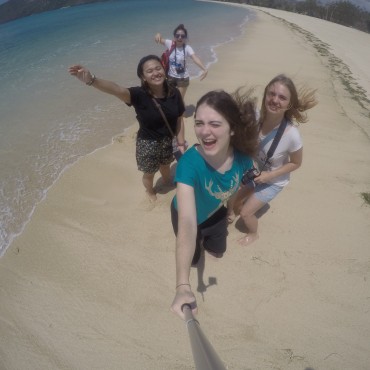 Just the four of us

Just the four of us

Second hack, go with some friends. The more the better, especially if the number is even. In my case, it was four – Tree, Janine, Emma, and I. Why? It can reduce the price so much, because you’ll share most of the budget spending like hotel/guesthouse, and transportation. In our case, we went to Koeta Lombok directly after we arrived at the International Airport, but Koeta was more than 30mins away, it was quite late at night & there was no public transportation going to that area, so we took a taxi to our guesthouse. And this is an important note: Take a taxi with Argo or meters, if you have to take the taxi without meters, do bargain to almost half the price they offer! Sometimes, when they see that tourists who know nothing come, especially if they are foreigners they’d ask way higher price. At that time we didn’t get the taxi with meters but we were lucky that our friend knew a real Lombok person so she told us how much the price of taxi would be. At first the taxi driver asked for more than IDR 100k, but because the price supposed to be IDR 70k (like my friend said) so we bargained to that price, but we failed HAHA. At the end we paid for IDR 80k, but it was not expensive at all because we shared it with the four of us, so each one only pays for IDR 20k. Can you imagine to pay that amount by yourself? It’s possible but it’s better to use the money for something else.

Another proof of ‘the more the better’, was about our guesthouse. In Koeta Lombok, we booked two rooms in a homestay  because we thought the rooms & beds would be small, turned out that one room was more than enough for the four of us. Fyi, we also initially didn’t want to sleep separately – so we canceled the other room and sleep in one room instead. That’s also the same case with our guesthouse in Gili, we just share one big room with 2 big beds and DONE. Cheap cheap. For a night, each one of us didn’t even pay for IDR 50k, it was less than that.

Moving on to the third hack, which is to backpack, instead of with suitcases. To be honest, yesterday’s trip was my very first trip with backpacks only, and it was with my friends’ influence. A new experience and I think there are two sides of bringing backpack; con: heavy because you have to keep on carrying that; pros: easy to mobile and reduce more spending.

I will admit that it was kinda annoying and heavy to bring my backpack instead of suitcase, but I think it is the easiest and the cheapest method of traveling. Why?

The next hack is that to choose a good place to stay! This is an extremely important thing as it will decide most of your spending in your vacation. But what I meant by ‘good’ is not about the luxury, or the price only, but about the worthiness – whether the facilities it offers match or exceed the rent price. Even though it is very cheap but it is far far away from everything, it isnt worthy. For me, during our stay in Lombok & Gili for five days, we managed to move in and out to three places; Koeta Lombok, Gili, Praya and we always got the best deal. But one thing to note, places we chose to stay were always really humble, cute but not fancy because we thought that we will be out everyday and thus our room will only be used for sleeping from midnight to 9am so why bother getting a luxurious one? So moving on, I have two tips about homestay. One: find a place that also offer trips/ rent other things & include the breakfast as well; Two: book it through booking.com at least a day before because this website offers places with cheaper price, at least that was what we did. Let me tell you about our experience:

We also have the Koeta Beach right outside of our door, we could just open the door and smell the beach already. It really felt like our own private beach because literally, there were no one else but us there. It was so hot, but our hearts were warmer ❤

Another good thing about this place was that because they have trustworthy car rental, we avoided getting scam from another non-meter taxi. We used the car & driver from the guesthouse and he took us to Mataram City for way cheaper price – even we got to stop at the family industry of Lombok traditional cloth  because the driver offered us. He also gave us cheap price because we were the guests in the homestay as well.

Other than that the staffs were so nice and turns out that they also arranged snorkeling trip, so we paid for IDR 120.000 to snorkel in three locations from 10am to 4pm. So cheap right? And it’s included the boat, going around Gili Trawangan, Gili Meno, Gili Air by boat and also included lunch at Gili Meno. The homestay also rent bicycle there with cheap price (daily or for some hours only), but we rent four bicycles for three hours and paid for IDR 100.000 only. But the staffs were so nice, too nice even because after those 3 hours, Janine & Tree got to use the bicycle for free. This homestay really made our Gili trip even better!

The last hack would be, travel like a local.  From our experience, what we did was to use public boat to cross from Lombok to Gili so it only cost us IDR 15.000, instead of private boat or speedboat which would be hundred thousands rupiah. Other than that, if you plan to snorkel, just use the public boat instead of private boat. Of course it would be cheap because you will go with at least 20 more people, but for us it was okay as they always wait for us until we finished. Or even a more cheaper, when Tree and Janine stayed for one more night, they also just rent the snorkel and that was it. They only paid for the snorkel they rent, and they can snorkel nearby by themselves.

Next thing was to rent a bicycle instead of taking horse carriage/ delman/cidomo if you want to go around. In the island, they have no cars or motorbike or whatsoever that’s why it was really clean and free from pollution. So if you plan to explore Gili Trawangan, it would be cheaper and nicer if you go around the island with your own bike in more or less three hours. I recommend it though because you can see the other side of the island that you haven’t seen yet, especially if you are not sure whether you’ll visit Gili again, or not. Bicycle would be better because you basically can travel anywhere for a day than horse carriage that will only take you to one place to another for almost the same price. And if you use bicycle, you can stop anywhere you want to just take picture, have some snacks, or even swim somewhere.

One last thing, maybe it would be good to bring a local, like I was being the only local out of these three. I think it kinda helped if you need to bargain something because they will give the local price instead of the foreign tourist price or bule price.

I guess that was it, my own experience in traveling to Lombok and spent less than IDR 3 million for five days four nights. It was a really enjoyable time I spent with these three powerpuff girls. And it was cheap, which makes it even more fantastic. I hope what I wrote helps somehow in your Lombok/Gili planning or any vacation planning.

Amalia, or you can call me Mal
An extroverted introvert who's in love with her cutie inner child x

30 Days Thought Catalog College Student(s) in a Nutshell Countdown to HK Europe and its Sparks Hong Kong, the City of Life Life and Love Review: Movies SCG Thailand International Internship 2017 Some thoughts Who Am I? Wonderful Indonesia